Covid-19 has affected the health of tens of thousands of UK adults, but the difficulties of illness are not limited to physical or mental wellbeing.

Health is one of the key drivers of vulnerability identified by the FCA, which can increase the risk of harm, for example being in poor health can lead to financial difficulties.   Researchers at the FCA examined the financial effects of having a health condition, and how the pandemic may have made things even harder.

What we mean by being in ‘poor health’

As part of its Financial Lives surveys (FLS) the FCA collects information on whether consumers have a physical or mental health condition or illness that has lasted or is expected to last 12 months or more, that reduces their ability to carry out day to day activities a lot. Within this article we refer to adults that meet this definition as being in ‘poor health’.

The FCA classifies ‘poor health’ as being made up of any of the following conditions: physical disability, hearing or visual impairments, poor mental health and/or low mental capacity or cognitive difficulties, or addiction. For full details of the Financial Lives definition see the full FLS report.

Being in poor health can affect people’s interactions and requirements from financial services in different ways. While some will only be marginally affected, some will experience difficulties interacting with financial services providers, others will require different types of products (such as specialist insurance) and others may not be able to afford certain products due to higher costs for healthcare provision, or having lower income due to their health condition.

The starting point for our analysis is data from the FCA’s Financial Lives Survey 2020 which shows us that in February 2020 6% of UK adults had poor health. We use this survey to look at the differences that existed between those in poor health and those that were not before Covid-19.

Those in poor health are more likely to be older

With health being a characteristic of vulnerability as set out in the FCA’s work on treating vulnerable customers fairly, it is important that firms understand the characteristics of vulnerability that are likely to be present in their target market and customer base. This includes adults in poor health, the types of products they own and how they interact with financial markets. 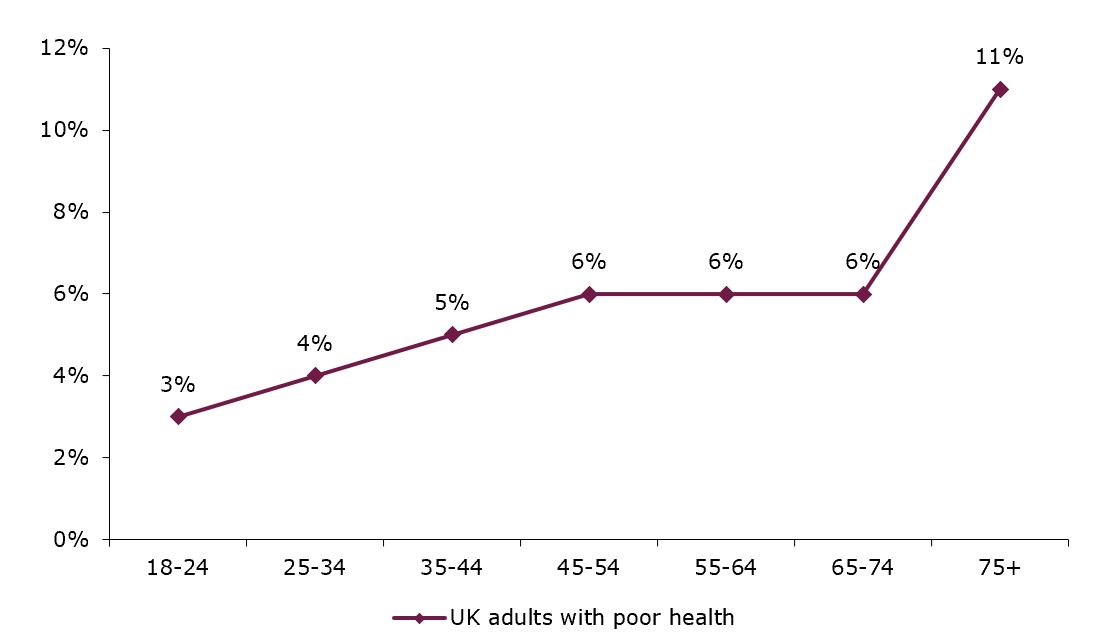 Looking just at those aged under 65, over 75% of adults who are not in poor health are in employment compared with is just 23% of those in poor health – amongst those under 65 in poor health over a third (48%) are unable to work due to their health condition.

To reflect these differences across age groups our analysis splits the population into those aged under and over 65; and then split further by whether they are in poor health. This gives 4 groups shown below.

Use of financial products prior to Covid-19

Using the Financial Lives survey data from February 2020 we can see the levels of ownership and use of a range of financial products. Among the under 65s a clear picture emerges – those in this age range in poor health were less likely to have any saving, investment, pension or insurance products and were more likely to be using credit.

Difference in product ownership before coronavirus – the under 65s 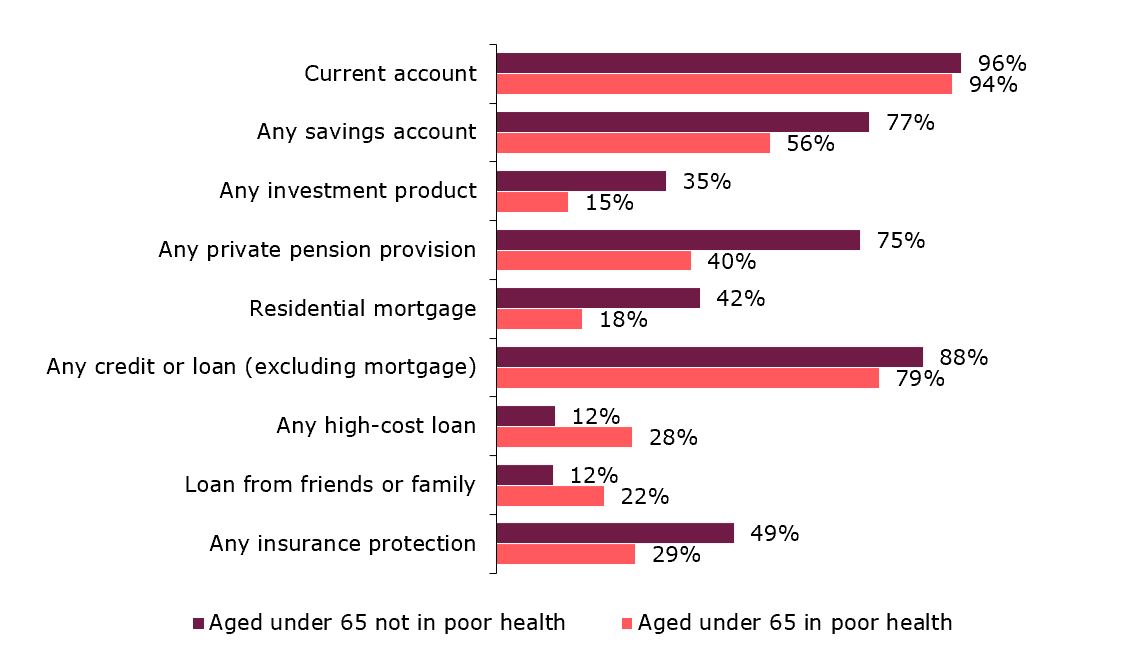 Even more concerning is the higher proportion of those of working age in poor health who had borrowed from an unregistered lender. While low at 1.3%, it is far higher than the 0.3% for those who are not in poor health. Lack of access to registered credit may be a contributing factor for those with poor health.

The broad conclusion is clear: people of working age with poor health entered the period of the pandemic with much lower levels of financial resilience.

Differences in product ownership before coronavirus – the over 65s

Looking at financial product ownership among the over 65s we see a more mixed picture when comparing those who are in poor health or not.

Higher savings, investments and private pension provision among those over 65 and not in poor health may suggest a higher level of financial resilience. For some later life will require extra buffers as expenses may be higher as a result of poor health. The data suggests that for those already in poor health these buffers are already being used, or for some do not exist in the first place.

But of course, the ownership and use of particular financial products is only a partial indicator of resilience. More important is how much savings people have and how much do they owe?

Mean debt levels by age and whether adults have poor health 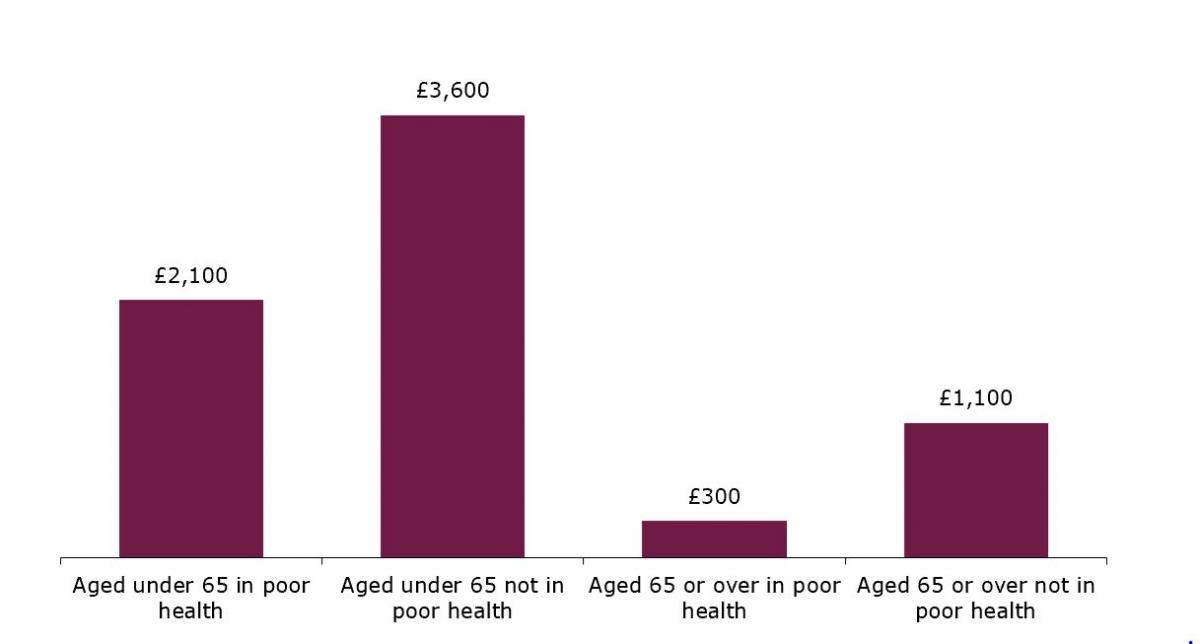 In February mean debt was lower for adults in poor health reflecting the products owned and lower incomes seen previously.

We now turn to the specific challenges that those in poor health face when dealing with financial services. All adults that deal with financial services can experience problems. Providers are required to treat all customers fairly (under Principle 6) and should consider the needs of consumers in their target market and customer base.  Under the Equality Act 2010, providers are required to make reasonable adjustments for people with disabilities. The types of measures that many providers have put in place prior to the Coronavirus pandemic include allowing wheelchair access to branches, hearing loops in branches, sign language support and online services that are accessible by the colour blind and partially sighted. Despite the efforts put in place by providers our research indicates that those in poor health do experience issues when dealing with providers while those not in poor health experience issues less frequently.

How has Covid-19 impacted those with poor health

The Coronavirus pandemic has impacted everyone in different ways. Next we look at how all adults have been impacted and what differences exist for those with one or more of the conditions that are included in the FCA’s definition of poor health.

Source: Financial Lives Top Up survey October 2020 Base: All UK consumers in employment (12,185)

Earlier analysis has shown inequalities in product ownership already exist and these changes risk making these worse. Those that are too ill to work may not be able to access the same products. They will not get the same insurances provided by some workplaces or be auto-enrolled into a pension scheme.

With the changes to work in mind it is unsurprising that those who are under 65 in poor health are more likely to report a decrease in household income since Covid-19 began than any of the other groups.

As shown in the chart below, those in poor health in both the under and over 65 age brackets are much more likely to have seen their financial situation worsen.

In fact, over half (57%) of those aged under 65, and who have poor health, have seen their financial situation worsen. That compares to 41% of those without a health condition.

However, a far higher proportion of those with a credit or loan product aged under 65 and in poor health have seen their debt increase since February 2020: two fifths have seen debt increase, compared to one fifth of those under 65 with a credit or loan product and in poor health. This should be seen in the context of lower levels of debt pre Covid-19.

The FCA’s research captures the number of UK adults that have taken any actions that may indicate financial distress, such as cutting back on spending, taking out more credit or being unable to pay off existing credit.

Our analysis shows that among those who are aged under 65 in poor health, over a third have cut back on essentials such as food or clothing, and just under a third have had to rely on savings to cover day to day expenses. A quarter of this group have borrowed from friends or family, and a fifth have taken out additional credit in some form. Further, around one in ten have had to borrow on one loan to make repayments on another or borrow from friends or family to make loan repayments.

Signs of financial distress since the pandemic began

The pattern is similar with regards to pensions: twice as many of those who were contributing to pension at the end of February, were aged under 65 and in poor health have reduced or stopped making contributions – 31% compared to 16% of those aged under 65 not in poor health. This is particularly alarming as we know that fewer adults with poor health have these products to start with, and that levels of savings are generally lower.

Just under one million people in poor health have felt more stressed since the start of the pandemic because their financial situation has worsened. Health conditions, and particularly mental health, can be short or long-term and firms should ensure their staff have the right skills and capability to recognise and respond to the needs of vulnerable consumers, including those with conditions such as stress and anxiety.

Stress and anxiety about finances since the pandemic began

Prior to the pandemic we know that those in poor health can have particular challenges when dealing with financial services providers. Throughout the pandemic for many being able to speak to providers has been essential – in cases of financial difficulty some have had to arrange payment deferrals while others have required credit. We know that providers have brought in measures to help all adults, but our research shows a higher incidence of adults aged under 65 in poor health being unable to access their existing products and engage with providers since the pandemic began.

Over one in ten of those aged under 65 in poor health say they have not been able to access their products as they couldn’t get through to providers, and one in ten could not access their products because they could not use their online services. Some of the differences shown in the figure above will be driven by differences in financial situation requiring contact with a provider, but those in poor health are over-represented in all categories.

When looking at engagement a larger proportion of those in poor health report that they have not received clear information from their provider and providers have not shown an understanding of the impacts of Covid-19.

Indicators suggest that as the pandemic continues many – regardless of their health status – will suffer through reduced incomes, changing working conditions and the mental strain of lockdown and not being able to lead a usual way of life. These pressures impact how all individuals manage their finances and the support that will be required. While the pandemic has affected all adults, for those in poor health the impact has been more detrimental. As our analysis shows the gap between those in poor health and those that are not has widened. Given the lower levels of financial resources among those in poor health pre-pandemic, it seems likely that this group may continue to face financial strains after the effects of the current health crisis have abated for the rest of the population.